Home › Labor and Employmnet › Favoritism in the Workplace
November 7, 2018

After reading the article you will have a deep understanding of:

Let’s dive into the topic.

What is Favoritism in the Workplace?

Favoritism at work is exactly what it sounds like: favoring someone not because he or she is doing a great job, but for reasons outside of the job performance. For instance, a manager consistently offers an employee the best and most highly-regarded projects, even though that employee does not perform well enough to deserve them. Or perhaps an employee is offered a promotion over someone else who has been at the company longer and has more experience. 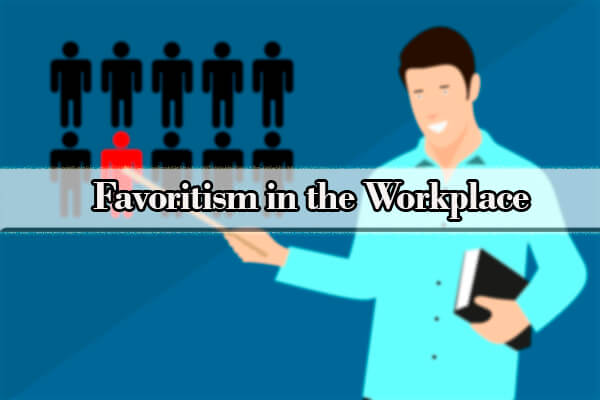 Nepotism in the workplace is a practice of appointing relatives to positions for which others are more qualified. Despite its negative connotations, nepotism can be an important and positive practice in the early stages of a startup company where people are usually being asked to work for low salaries.

Cronyism, on the other hand, is the act of hiring friends and associates regardless of qualifications. One of the main problems with cronyism, which you also find in nepotism in the workplace, is the feeling of entitlement that employees hired under these circumstances feel. Because they are friends with, or are related to, an executive with the company, they feel they deserve raises and promotions that should be reserved for more qualified staff members. This creates conflict in the workplace and can result in losing qualified employees.

One way that companies try to hide favoritism is by promoting employees they trust into positions of management, and then asking those managers to hire their friends and family members. This kind of preferential treatment has the potential to spread throughout the company as management brings more of their favorite employees into positions of authority.

The bottom line is that favoritism, nepotism, and cronyism all lead to unfair treatment at work.

Is Favoritism at Work Illegal?

While favoritism in the workplace is not, in and of itself, unlawful, favoritism does become illegal discrimination when the reason behind the favoritism is related to race, age, sex, religion, national origin, disability, pregnancy, sexual orientation, color or genetic information. That means that as long as your boss is not making decisions based on one of the aforementioned protected traits, he or she is perfectly entitled to play favorites and hire, promote, or offer additional benefits to anyone he or she likes. Thus, your manager is not violating the law by favoring his or her golfing buddies, family members, or even someone on which he or she has a crush.

What are the Major Problems with Favoritism at Work?

Favoritism can be an illegal discrimination

This happens when employers make job decisions based on employees’ protected characteristics/traits. If a manager’s favoritism is based on a protected characteristic, such as race, sex, or religion, it would constitute illegal discrimination. For example, it is illegal for a manager to refuse to promote Latino employees and/or to only give desirable assignments to younger workers.

Favoritism in form of sexual harassment

Favoritism as a retaliation

Favoritism might violate laws that prohibit retaliation too. For example, it is illegal for a manager to favor employees who have not complained of discrimination or engaged in some other protected activity. 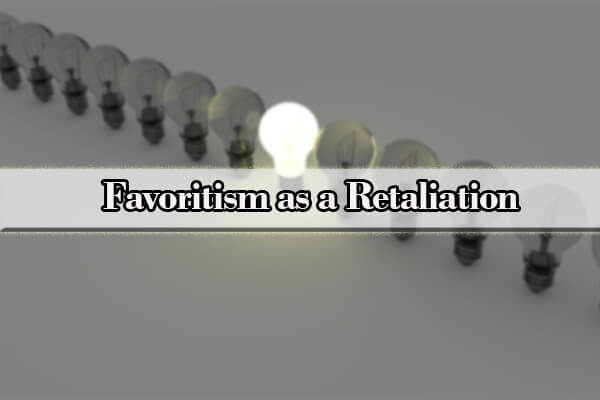 Similarly, it is also illegal retaliation if a manager disfavors an employee (for example, by cutting back her hours, assigning her to the graveyard shift, or taking away prestigious clients) after she complains of discrimination.

When a supervisor continually favors one or a few employees over the others, he or she may be missing out on the talents and skills the others bring to the table. This can lead to promoting someone who is not ready for more responsibilities over someone who is ready and able to take on a challenge.

There is a general sense of unfairness when employees perceive that there is favoritism in the way in which they are treated by management. This brings down company morale because favoritism leads employees to believe that no matter what they do, their efforts won’t be rewarded if they are not one of the favored few.

Favoritism can cause employees to begin to resent the supervisor who is unfairly favoring employees who may not be the most deserving, as well as resent the favored employees who are taking advantage of the situation.

If the resentment reaches a certain point, the company may be at risk of losing some potentially excellent employees who won’t want to stick around where they’re not appreciated.

With a decline in morale, growing resentment, and overlooked potential, a supervisor who unfairly favors one group of employees is also hurting the company overall by stunting the growth that would come from moving the best employees forward to management positions. This also is a consequence of losing employees who may have been of great value.

Signs of Legal Favoritism at Work

Some signs of legal favoritism are as follows:

While it might not be an illegal practice, these signs of favoritism at work could really upset other employees and affect the workplace environment. If you’re concerned that you receive unfair treatment at work, consult unfair workplace lawyers to learn what can be done with the situation.

Examples of Illegal Favoritism in the Workplace

The following examples of favoritism in the workplace are illegal.

If you encounter any of these or similar cases at work, you should consult lawyers for workplace fairness to ensure that illegal practices are put to an end.

What to Do if You Encounter Favoritism in the Workplace?

Try to understand the reason for the preferential treatment. Is it a friendship or other relationship? Is it because of a history or common experience together? Is it simply a matter of habit or trust? Is it due to an unlawful discriminatory reason? Knowing this may help you determine whether it is legal or illegal favoritism. 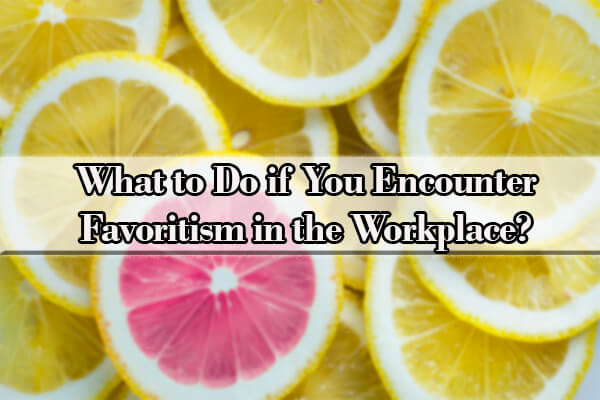 Speak with your coworkers and find out if they notice the same thing as you. If you are suspecting the illegal form of favoritism (such as ones involving harassment, retaliation or discrimination), it is good to have a witness who could confirm your observations. It is very smart to try to identify the motivation behind the favoritism prior to complaining because discrimination complaints are protected against retaliation while complaints of non-discriminatory favoritism are not protected.

If you believe that the favoritism is the result of discrimination or retaliation (for complaining of discrimination), complain to Human Resources or your supervisor in writing and inform them that you have witnessed discrimination, harassment, or retaliation. Sometimes, just bringing it to the employer’s attention can solve the problem. Once aware, the manager can work to treat employees more fairly.

Regardless of whether your case involves an illegal form of favoritism, most companies try to eliminate favoritism in the workplace, so reporting this to Human Resources or your supervisor can actually be beneficial for the company. If Human Resources and your supervisor are incapable of managing the illegal favoritism in the workplace, then you need professional help. Whether favoritism provides grounds for a lawsuit depends solely on why the favoritism took place. An experienced employment lawyer can assess whether you have any claims against your employer, and how best to protect your rights.

Can I Sue my Employer for Unfair Treatment Based on Favoritism?

Each situation is different but if you believe you were treated unfairly at work due to a discriminatory or retaliatory motive, you may call Moshes Law for a free consultation.

Q: Is it illegal to show favoritism at work?

A: Although lots of Americans believe that favoritism is illegal, it is not. Showing favoritism is only illegal if it is based on either discriminatory or retaliatory reasons.

Q: Can you sue for favoritism?

Q: What is nepotism and favoritism?

Q: How do you deal with favoritism at work?

A: Take an honest look to figure out whether the favored employee is receiving preferential treatment based on a discriminatory and/or retaliatory reason. If so, complain to your employer that you believe you are the victim of discrimination and/or retaliation, and contact an employment attorney to see if you have a legal case.

Q: Can you sue your employer for creating a hostile work environment?

A: Yes, you can bring an action against your employer for harassment (hostile work environment) only if you are able to show that the harassment is based on a discriminatory or retaliatory animus.

Do you feel that you experience unfair treatment at work? Are you concerned that the favoritism you face might be illegal? Contact unfair workplace lawyers at the Law Office of Yuriy Moshes, P.C. We protect rights of employees in the greater New York City area including all its boroughs (Manhattan, Brooklyn, Queens, the Bronx, and Staten Island) as well as Northern New Jersey, Long Island, and Upstate New York.

Fill out the form below to recieve a free and confidential intial consultation.

Our lawyers are available 24/7. We are here for you on evenings, weekends and holidays and will work around your schedule to defend your rights.

STAY CONNECTED WITH US: