Question:Can you sue for unpaid wages?

Plaintiff Mahendran had worked for Metropolitan Specialty Lab’s, Inc. as a Medical Technologist since February 2011 earning $26.00 an hour. She worked a regular 40 hours a week. However, in September 2012, despite the fact that Plaintiff Mahendran continued to perform her job duties and work her normal hours, her employer stopped paying the regular designated pay and instead, just paid her random amounts and at sporadic times.

Plaintiff Christian had worked for Metropolitan Specialty Lab’s, Inc. as an Accession Personnel / Receptionist since February 2012 earning $15.00 an hour, in which she worked at a regular 40 hours a week. In August 2012, she received a raise to $975.00 per week. However, on 09/16/12, despite the fact that Plaintiff Christian continued to perform her duties and work her normal hours, like Plaintiff Mahendran, the employer just stopped paying on time and instead, just paid Plaintiff Christian random amounts and at sporadic times.

Despite not being paid, Plaintiffs continued to work because Defendants always told them that they would catch up with the amounts owed eventually.

The Defendants did not maintain any system of recording hours actually worked by their employees. The Defendants misled Plaintiffs to believe they would be paid back the amounts owed for the hours worked. 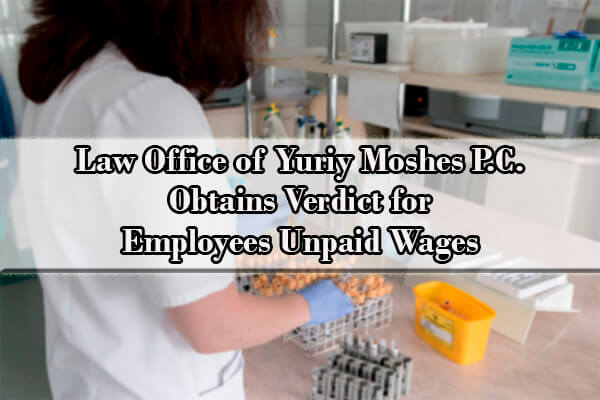 In the complaint, as a result of the Defendant’s violation of the NYLL and FLSA, Plaintiffs claimed a) the full amount of underpayment, (b) attorneys’ fees and costs, (c) prejudgment interest, and (d) an additional amount as liquidated damages equal to one hundred percent of the total amount of wages found to be due.

Both Plaintiffs also claimed that the Defendants had violated the New York wage theft prevention act, or specifically the Theft Prevention Act, New York Labor Law § 195, et seq., and sought damages they had suffered as a result of Defendants’ failure to provide Plaintiffs with any sort of written notice regarding: their regular rate of pay, overtime rate of pay, how they were to be paid, their “regular payday,” the official name of the employer and any other names used for business, the address and phone number of the employer’s main office or principal location, nor, allowances taken as part of the minimum wage (including, inter alia, tips).

Under the New York wage theft prevention act, employers are to give written notice of wage rates to each new hire. The notice must include:

The notice must be given both in English and in the employee’s primary language (if the Labor Department offers a translation). The Department currently offers translations in the following languages: Spanish, Chinese, Haitian Creole, Korean, Polish and Russian.

The complaint also alleged that the Defendants failed to pay Plaintiffs the minimum wage rate for all hours worked as required by law, in violation of the FLSA and NYLL.

The Court jointly awarded Plaintiff Christian and Plaintiff Mahendran $81,500.00 in attorneys fees and $1,805.98 in costs. Accordingly, the Defendants have to pay the Plaintiffs’ unpaid wages attorney and unpaid wages lawyer directly.